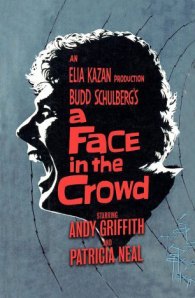 Every so often I come across an old fifties American film that I was previously unaware of that blows me away. Previous examples include such classics as ‘Night of the Hunter’ and the ‘Sweet Smell of Success’. ‘A Face in the Crowd’ is right up there with them. Directed by Elia Kazan and written by Budd Schulburg, the film is eerily prescient.

It’s the story of Lonesome Rhodes, a drifter who is recorded singing by a local radio station and becomes a national sensation in a matter of months. With his homespun wisdom and his just plain folks shtick, Lonesome makes people believe he is just like them.

Nothing could be further from the truth. He is an arrogant, egotistical individual that says of his audience ” This whole country’s just like my flock of sheep!” 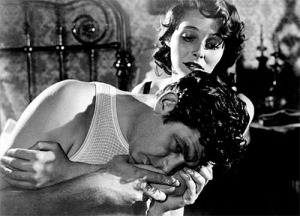 Pretty soon he is not just content to have his own rating topping show. He wants to use his power to mould politician’s, maybe even one-day hold high office himself.

Remind you of anyone? If you thought of Glen Beck or Sarah Palin, congratulations you’re right in my headspace.

The film is a warning from the past to us in the present never to forget just how easily the incredibly confident and incredibly stupid entertainer can suddenly become our master.