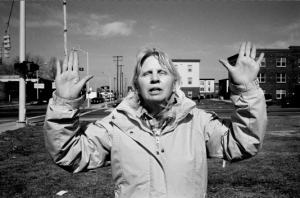 A couple of years back I had to travel to Detroit on business. As we drove through the city streets one of my companions pointed to a large tower block on the horizon. ‘There are 40 floors in that building. Guess how many have businesses in them?”

The very disturbing answer was one. One lone business in a building created in the confidence that it would be filled for decades.

As we continued to drive through an increasingly derelict scene, we see row upon row of boarded up houses. But these were not the typical inner city tenements. They were lower middle class homes with front gardens now hugely overgrown abandoned to decay.

In short this was a lesson in what happens when a society collapses. Bruce Gilden has long taken an interest in the issue of foreclosures in contemporary America first in Florida and then in 2009 in Detroit. His book is a depressing view of how many are sinking into poverty on the back of an economic downturn that threatens to engulf the entire decade five years after it’s beginning.

Gilden’s in your face style has been toned down in favor of portraits of some of the victims along with simple observed images of rotting houses and signs, which speak of how low you can go when a city implodes. 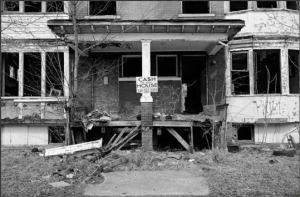 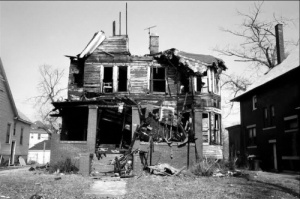 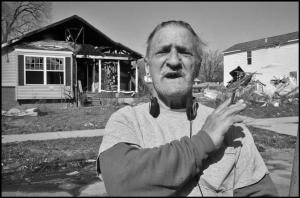